Notes from Wired "Inside the Cyberattack That Shocked the US Government"

Wired article, "Inside the Cyberattack That Shocked the US Government" had several phrases that rang true and seemed deserving of as much attention as daily flossing (perhaps not the most glamorous or pleasant of tasks yet with possibly dramatic improvements in one's social standing).

Main takeaways (for me):

Here is to better teeth - if only security-wise.
Posted by Alex G. at 3:12 PM No comments:

Some HP servers (that are actually smaller than an HP Z820) can fit up to 16 (yes, sixteen) SFF drives. 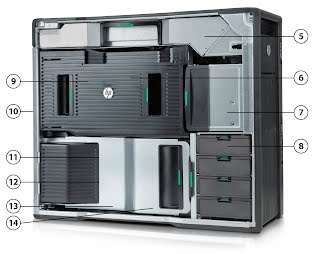 HP Z820
How many can a Z820 fit? Four in standard LFF (Legacy Form Factor) bays (see "8" in the illustration above) and 4-6 more, two per optical bay using an adapter like this: 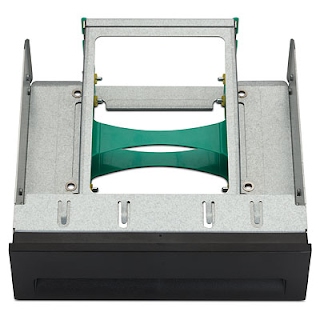 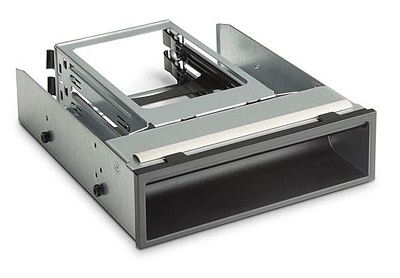 That's a total of ten (eight if there's a DVD drive), while the system has fourteen SAS/SATA ports. You can see where we're going with this.

Why SFF (Small Form Factor) drives? For one, they're the present and immediate future of storage. SSDs are mostly SFF or smaller. SFF drives benefit from less vibration and can be made to higher tolerances. More SFF drives can fit in the same space which means higher speeds when you stripe them, which in turn means you may not need a heavy, bulky, expensive external SAS expander box to house a bunch of drives for those uncompressed 4K workflows. 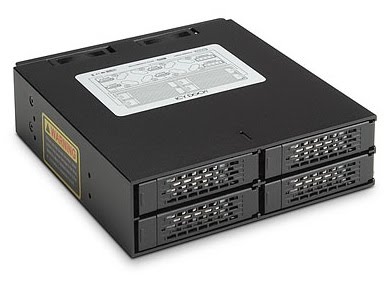 This metal device lets you use four SAS or SATA spinning or SSD drives, and has two fans and four SAS ports in the back, in addition to a single Molex 4-pin power connector.Two of those, and you can have a total of 12 drives in the system. Not quite server grade: HP server drive trays are much, much nicer, support hot swapping with the right controller, and their activity light indicate possible fault and RAID set identification, besides, well, activity. This unit's activity lights are tiny, hard to see, and in my experience, don't always work. We've asked HP to come up with server-grade backplanes for the workstations and still hoping it might happen.

How many of these units can fit in a Z820? Theoretically three as there are three "optical" (5.25" half-height) bays in a Z820, two if an internal CD or DVD drive is used. They're a rather tight fit against the CPU fan housing so choose your SATA cables wisely: those with long necks may not work well. 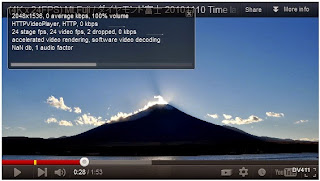 Searching for 4k (4096 horizontally by 2306 or some other number vertically) videos on Youtube today, I realized there aren't any. Including those that certainly were 4K last time I watched them - probably 6 months to a year ago.

If you are interested in videos with resolutions higher than 1080p, you may remember that YouTube announced support for full 4K resolutions in their official blog post of July 2010, "What's bigger than 1080p? 4K video comes to YouTube". No subsequent blog posts seem to announce any changes to supported resolutions. In my blog post shortly after YouTube's announcement of 4K support, I pondered about the reasons YouTube decided to support 4K given the extreme rarity of computer systems and devices that were capable of displaying it. My guess was YouTube was future-proofing itself and playing with possibilities.

Here is the playlist I assembled of 4K 2K clips. In quite a few of them, you see the posted resolution of 4096xN where "N" is the vertical resolution number usually between 2160 and 3072. All of these videos now only play at 2048x1536. You can verify that by right-clicking on the video and selecting "Show video info".

Do you know why and when YouTube decided to stop supporting full 4K videos?

(A 2K video sample. To watch it in full 2K glory, click "Play" first; then select "original" in video settings - the wrench symbol in the bottom right of the player box. Make it full screen. Pause and wait till it buffers if you don't have a particularly fast Internet connection. It helps if your monitor is large with a native resolution higher than 1080p.  How's the viewing experience?)


To perform the test, run "WinSAT mem" from administrative command prompt ("cmd" in administrative mode).  For instructions, refer to "Quick Disk Benchmark in Windows" post on this blog.

Theoretically, Z820's quad channel configuration (vs. triple-channel in Z800) accounts for a 25% increase; so does faster memory (1333MHz vs. 1066MHz).  The theoretical increase should have been roughly 50% - not quite the 80% improvement we clocked.  I will try to find a faster Z800 and benchmark it as well.

What is the memory speed of your system?
Posted by Unknown at 4:46 PM No comments:

Jason Perlow's article in ZDNet entitled "Post-PC era means mass extinction for personal computer OEMs" predicts demise of PC manufacturing as we know it: Dell and HP will go the way of dinosaurs unless they make dramatic changes.

More importantly for specialty systems integrators like us, the business as we know it will dry up on several fronts.  One, COTS (commercial off-the-shelf) components will be fewer to choose from due to natural migration from desktops and workstations to tablets and laptops.  Two: video editing is changing dramatically as well, migrating from specialty workstations and desktops to (a) mobile platforms including tablets and even phones, and in large scale (studio) environments, eventually to (b) client-server systems where editing can be done on any screen connected to a private cloud.  Considering the advances in web applications, web-based video editing can't be too far off; its feasibility mainly a question of available bandwidth and its costs.  Tablet and Web-based video editing will require very little integration.

"Give a developer or someone in the scientific/engineering field a lot of back end server power on a private cloud and a professional monitor attached to a thin client, along with technologies like Microsoft’s RemoteFX for server-side GPU rendering of virtual desktops, and the need for those big desktops could entirely disappear."

If you have any doubts, consider that computer performance acceleration always outpaced demand for it in video applications.  10 years ago, you absolutely needed an expensive workstation to work even with mildly compressed SD material.  Today, HD editing is almost child play on sub-$1K laptops, a $2K laptop will afford GPU acceleration in Premiere Pro CS6.  While editing 4K on an ultrabook is probably a pain, the day is near when it will be a reality.

The demand for desktops and workstations steadily drops.

Are PC and specialty integrators doomed?  Yes and no.  We are doomed if we don't adapt and diversify into areas where integration and engineering will still be needed.  Here are some ideas:


Will some content creators still require high-powered desktops and workstations with stacks of expensive GPUs inside?  Probably.  The real question is, will there be nearly as many vendors and integrators offering them in not so distant future?  As Jason points out in his article, "...to that, the answer is a resounding no."
Posted by Unknown at 9:28 PM No comments:

Some details are rather sketchy, probably on purpose:


(I hope you forgive my calling an already laconic "Ki Pro Quad", a "KPQ".  It just sounds good.)

See Todd Kopriva's blog for an extensive list of "what's new and changed".  Here are just a few points:

There will be more; stay tuned.
Posted by Unknown at 2:13 AM No comments: